Bamboo are found in the Bamboo Forest . When the bottom block is mined the entire tree falls. Bamboo trees yield bamboo stalks instead of blocks of raw wood. The stalks can be used as sticks or to craft Bamboo thatch blocks. There are no bamboo slabs or stairs.

When bamboo stalks are planted on dirt or grass, they behave almost like sugar canes, but they do not need water sources.

The bamboo stalk grows until it is 3 blocks tall, it will not become a bamboo tree. In 1.9.4 the texture was changed so they are now more green rather than yellow. However, should you want to start a bamboo forest of your own, they act like trees in the way that breaking their leaves has a chance of dropping bamboo saplings.

NOTE: Since 1.14 bamboo has been added into the game. This will most likely be removed in later versions of the mod.

Planks: Bamboo Thatch (has to be crafted)

Crafting: no slabs, no stairs

Greener Bamboo Wood Design.
Add a photo to this gallery 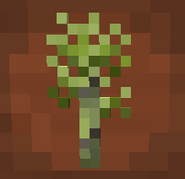 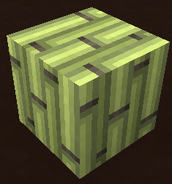 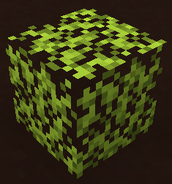 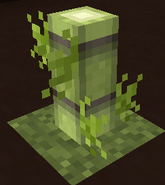 Add a photo to this gallery

Retrieved from "https://biomesoplenty.fandom.com/wiki/Bamboo?oldid=28959"
Community content is available under CC-BY-SA unless otherwise noted.