Quicksand is a liquid block found in desert and savanna type biomes, including the vanilla Desert and the Tropical Rainforest biome. Quicksand acts much like Hot Spring Water as it cannot be made into an infinite source, but can still be collected by a bucket.

Quicksand spawn in water pool-shaped holes and are mostly 1 block deep. Like Cobwebs, if a player walks into quicksand they will be slowed dramatically and begin to sink into the block. However, unlike cobwebs, quicksand will suffocate the player if their head dips into the block. If another liquid touches Quicksand, it will turn into Mud. Going under it will show the same appearance as if you went underwater.

Before 1.9 it was a solid block that was the full size of an ordinary block, it was mined with a spade as well. Before 1.8 it had a different texture, almost the same as sand but slightly more yellow.

If you do fall in, it takes a little less than 30 seconds to fall completely sink a pit of quicksand. You can't swim upwards out of quicksand, but you can remove the Quicksand with sponges, or use another liquid-filled bucket on the ledges so that the Quicksand turns into mud. You also can escape by using Ender Pearl to teleport to safe block.

Of course, the best way to get out of quicksand is to not get into it in the first place. If you are traversing a desert or the like on foot, then keep your eyes open for quicksand patches. If you find yourself frequently crossing a desert, remove all the quicksand from your path - or make a bridge.

Quicksand can be placed in a one layer deep pit as a means of trapping mobs. Mobs will walk into the pit and be unable to climb out. You can do a two-block deep trap for hostile mobs to kill them too. Hostile mobs do not burn in quicksand though.

Endermen appear unable to teleport out of quicksand (citation needed)

Quicksand may be used to make cheap, effective mob grinders. Cave spiders are able to survive passing through twelve blocks of quicksand with only a half heart at the end, making them the most effective mob to grind for experience. (They can be killed with a single punch)

Quicksand in a desert in 1.12.2
Add a photo to this gallery 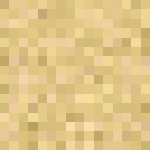 The old texture for Quicksand

Quicksand in a desert in 1.7.10
Add a photo to this gallery

Retrieved from "https://biomesoplenty.fandom.com/wiki/Quicksand?oldid=28932"
Community content is available under CC-BY-SA unless otherwise noted.